The nomads way, I wandered through the city. Stayed and talked. Been looking for signs. Seen the past hover over the streets while the present is completely there. Met great, varmhearted people.
I have learned a lot. About Belgrade, Serbia and the Balkans, about politics, love, and history. And about myself, of course.
I have written and have new ideas and one day I hope to tell you what happened when I met the ghosts from Savamala.
They want to be told in a particular way.
But it will be later, becouse I´am on my way home, but I leave a piece of my heart in Belgrade.I’m not saying goodbye, I say we meet again …

Each new novel requires a soundtrack. Music that underscores a theme, reinforces the right feeling and provides an opportunity to give vent to the frustration that always comes with writing.
Sometimes I do not even like the music I choose when I work with a novel, just as long it gives the right energy.
A recurring song for treating hard jerk frustration is Foo Fighters Monkey wrench (and it must be played loud).
My recently published novel Svark kvark summed up for me in the line “Im just a teenage dirtbag, baby.” A hit by Wheatus that can seem shallow when you know the historical aspects of the story. Nevertheless, It was perfect.
I have just submitted a manuscript to my publisher and Green Day’s “Boulevard of Broking Dreams” have been played frequently . A song that you might not associate with a reincarnated Samigod  and the magic landscape of Gaskelante. But they turned out to be good for each other.
During my walkabouts in Belgrade I have tryed to find out the soundtrack of the city. Any suggestions?

What does all the signs of the facades means? Not just literally, but symbolically. The letters and the pictures seem to me inscribed in Belgrade’s soul and I stand speechless before it. I wonder: What does it mean not to be able to read? Not being able to distinguish the people behind the inscriptions. What are their experiences? Their dreams? Their willingness? What can I learn from this allienation?

After an exciting meeting yesterday with a new friend, I learned a lot about land grabbing, something that (sadly) seems to exist everywhere in the world. It was useful, as the novel I’m working on here in Belgrade is about a kind of land grabbing used in the north of Sweden.  I got another perspective on the problem, so thanks Milenko!
On the way home I passed a ghost in a rather desolate block in Savamala that made me think of Edgar Allen Poe and suddenly I had a new novel idea.
Belgrade is simply magnetic energy.

Belgrade’s streets are magical. Of course, because of the people that move in them, the buildings and the atmosphere but also because of a reason more difficult to explain.
The streets are moving. They are rarely where they were last, and yet in some strange way, they still take you where you were going.
Like for an example when I walked with Vladimir Arsenijevic  and Ursula Burger and a friend who was visiting and lived next door to Hotel Moscow. We were going headed to Savamala. As the wandering nomad I am, I always looking for guidance in the surrounding area to find a way back. We walked one block, I pointed to a path that strove up and asked where I got if I chosed it.
The Hotel Moscow was the answer.
I asked again a few blocks later.
To Hotel Moscow.
The third time I did not bother to ask. I pointed and said:
Let me guess, this road goes to  Hotel Moscow?
They nodded.
So now I have learned. All roads lead to The hotel Moscow, or what goal you happens to have. In Belgrade you will always reach your goals.

The picture down below is Vladimir and my friend walking the roads of Ada Ciganlija that by the way lays still.

Walking through Belgrade in different directions, consider shades of gray when it occasionally pops up colorful exclamation that inspires a kind of hope.
Something like that is the situation of my people in Sweden today. Once more is our land colonized, this time by mining companies. But then pops the colorful Sami resistance up, with the support of people across the world who understand that we need to establish a long term, sustainable and peaceful relationship with nature.

Right now in Gállok, Sápmi,the police is remowing protester using violence.
The picture below is from Palilula, Belgrade. 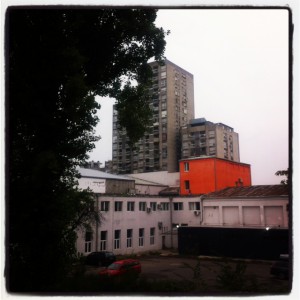 I ducked under the thunder, the rain was pouring down and it slammed and flashed. I learnt early in lifte that thunderstorms means it’s time for soul searching and you have to be honest and humble. Thors hammer is in fact the clearest sign that it’s time to pull your self together. Therefore I’ll twist and turn most things in life and try to get on track again, otherwise he will beat the shit out of me the next time.