One of my favorite stories when I was young was about this silver colored train in the Stockholm underground system. All the other trains had colors – blue, orange or green. You where not supposed to get on the silver train. If you did, you would never get off. You would be condemned to travel the tunnels for ever – and ever – and ever … The train actually existed. It was just a regular train that had not been painted. But I remember the first time I was standing on the platform and saw it coming out of the tunnel. Of course I knew it was just a story – but I could not help hesitating before getting on.

People find different things scary. Some are freaked out by spiders or snakes, others get shivers from stories of serial killers, monsters or Japanese girls with long black hair. I have come to realize that the stories that scare me the most are the ones that take place very close to reality or in a situation that I somehow can identify with – when threats and horror materializes and when where you are supposed to be safe – in your house, at school or on the bus. I love when movie makers and authors bring the fear into our homes, into our regular life. (These stories can also be quite original – and that doesn’t happen too often in the horror genre.)

Stephen King is a master when it comes to hauntings in everyday life. For instance he created ”It” – the evil clown in the book with the same name – and Christine, the haunted car that changes it’s owner’s personality and turn them into monsters. Alfred Hitchcock turned regular seagulls and sparrows into nightmares with the movie Birds and he made many – especially women – avoid shower curtains for years after watching the movie Psycho. Then there is of course Ted Hooper’s and Steven Spielberg’s movie Poltergeist that made us all fear television sets – at least for a couple of hours.

When I was a kid I was actually afraid of the bath tub – after reading the book Jaws (more known as a movie by Steven Spielberg) by Peter Benchley. Even though I realize that I overdid it just a tiny bit – I know that many baths lost a great number of visitors at the time. Even swimming pools scared people. In that case the horror actually entered reality – without being realistic at all.

Stephen King’s book Pet Cemetery is one of the scariest books I have ever read (and the soundtrack from the movie, recorded by one of King’s favorite bands The Ramones is just brilliant). Pet Cemetery is as story about parents not being able to talk to children about death. Therefore they bury loved pets in a special place that makes the animals come back – but not as sweet and friendly as they once where. Instead they are weird smelling creatures that can’t really be trusted. After reading that it took me a while before I looked at my 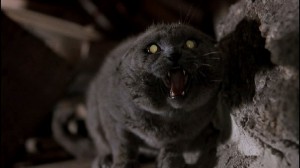 cat the same way again.To me, old abandoned houses, vampires and zombies are a child’s play compared to stories where best friends, pets or mothers starts acting evil, scary or just weird. And the closer it gets to home, the better and more intimidating it is. I believe the scariest thing that can happen to many of us is that we ourselves loose control, go mad – and do evil deeds. But it’s a good thing to keep in mind – that we all might be monsters. Like Anthony Perkins aka Norman Bates says in Psycho – We all go a little mad sometimes …